Morison’s vision was grand. A catalogue of the planet’s plant life arranged according to a classification based on the ‘Book of Nature’ rather than anthropocentric properties of plants, such as their medicinal use. Moreover, if Morison’s principles of classification were correct, they would be able to accommodate not only all known plants but those that were yet to be discovered. There is no evidence Morison believed all the planet’s plants were known to him.

To garner enthusiasm for his scheme, and reveal part of his vision, Morison authored, and the fledgling University Press published, Plantarum umbelliferarum distributio nova (1672). In the Preface, Morison states the group’s generic characters were taken from the ‘seed’ (Morison made no distinction between fruit and seed), and specific characters from features of the root, leaf, or stem, or from properties such as taste, smell, or colour. However, the umbellifers as a group was not originated by Morison. Cesalpino, in De Plantis Libri XVI (1583), called the group 'universum genus Ferulaceum', whilst Bauhin, in Pinax Theatri Botanici (1623), used the name ‘Umbelliferae’.

What Morison did in the Preface, with more precision than previous authors, was to define the group as having ‘round tops, with leaning or sloping stems, many arising from the radius at the centre (the top of the stem), the surface mostly flat, some convex, sometimes concave. The flowers are most often white, sometimes yellow, rarely tinged purple. Ephemeral flowers succeed each other, constant and steadfast in an unchanging order of nature, with five joined petals or leaflets. Two seeds joined together; the seed may be of any form or shape, with her face to the hollow part of the line joining them; the is back convex’. Today, Morison’s Umbelliferae is composed of members of the carrot family (Apiaceae). Moreover, he made clear the Plantarum umbelliferarum was part of a greater work by referring to the Corymbiferae of Section VIII (when Part 3 of the Historia was published in 1699, Section VIII was not Corymbiferae) and starting the text with ‘Section IX. Caput I’.

Frontmatter to this folio comprises a two-page Dedication to the Chancellor of the University, the lord lieutenant of Ireland, James FitzThomas Butler (1610-1688), a similar length Dedication to the University and a three-page Preface, addressed to the reader. There are 91 pages of main text (including a short errata), eight diagrammatic plates (plus associated explanatory text) of how species are arranged and twelve pages of copperplate engravings (plus associated explanatory text) to illustrate key features of Morison’s groups in the Umbelliferae.

On the evidence of this volume, Morison offered the botanical world an accessible, superbly illustrated, coherent classification system. Morison was convinced he had ‘given an Essay in one of the most difficult Classes’ to the ‘great satisfaction of the Learned, both at home and abroad’ (Morison, 1675: 327). Today, botanists consider the Plantarum umbelliferarum to be the first taxonomic monograph, i.e., a detailed botanical account of a coherently defined group of species.

Morison, R 1675. A Proposal to Noblemen, Gentlemen and others, who are willing to subscribe towards Dr. Morison’s New Universal Herbal, ordering Plants according to a new and true Method, never published heretofore. Philosophical Transactions of the Royal Society 114: 327-328. 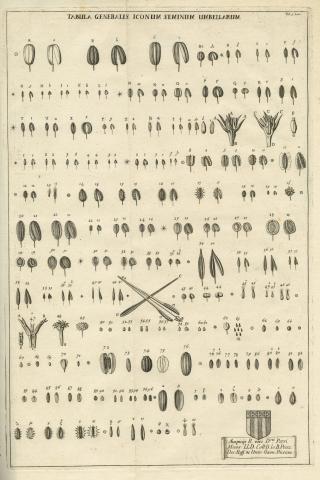 Displaying ‘kindreds and affinities’
Not prescribed 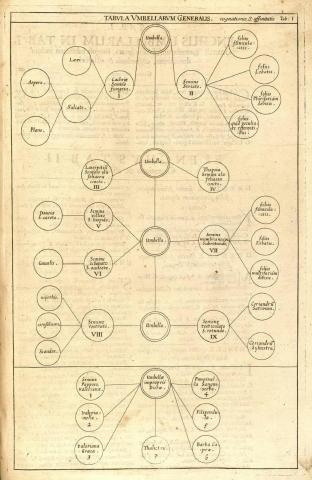