Who is the 'alchemist' in this painting? Is it Grand Duke Francesco I de' Medici (bottom right), the physician (above him), or the anonymous artisan (middle)?

In 1570, the Flemish artisan Jan van der Straet (1523-1605), also called Giovanni Stradano or Johannes Stradanus, was one of the several artisans involved in the painting of the Studiolo of Francesco I (1541-1587), Grand Duke of Tuscany between 1574 and 1587. Stradanus produced two paintings for the Studiolo, of which this is the most famous.

Francesco I was an enthusiastic patron of the arts and was involved himself in the running of the Medici family's workshops and laboratories. This image renders the ambiance of the laboratory in the Palazzo Vecchio, which had been built by Cosimo I, Francesco's father. Cosimo I was passionate about alchemy, and passed his fascination for it to his son, who delved into it hands on, as is witnessed by this painting.

From 1574, the main alchemical and artisan operations moved to Francesco's newly-constructed 'house of nature', the Casino di San Marco, built specifically for experimentation.

In Depth.
Stradanus's depiction of the Palazzo Vecchio alchemical laboratory is both realistic and stylised. It is part of several adjacent paintings where Francesco is shown as actively supervising or working in; in Giovanni Maria Butteri's rendition of the glass workshop, Francesco inspects a glass piece, while in Alessandro Fei's portrayal of the jewelry atelier Francesco is working himself on his father's crown.

However, Francesco's presence in the alchemical laboratory painting was not part of the preparatory drawing of Stradanus, which is rendered in Image 2. We can see clearly that Stradanus drew an anonymous artisan instead of Francesco: 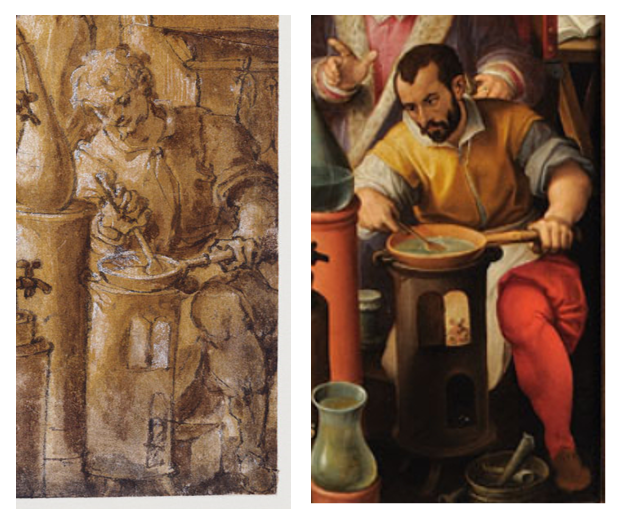 Clearly, someone asked him to superimpose Francesco over this image, and we can suppose that this was the designer of the Studiolo, Vincenzo Borghini. The change is meant to emphasise Francesco's artisan credentials as an earnest laboratory worker. At the same time, Francesco is not seeking to claim the status of being an alchemical expert. The focus of the painting remains on the anonymous laboratory artisan with an angelic face, and Francesco also stands lower than the physician.

Borghini probably also instructed Stradanus to add another character behind Francesco. To do so, an artisan working in an oven had to be erased from the picture.

Who is this person? Two identifications have been provided to date. One is Giuseppe Benincasa (Joseph Goedenhuyse), the Medici botanist, the other is Sisto di Bonsisti of Norcia. The first identification (by Studiolo scholar Scott Schaeffer in 1976) cannot be accepted, as in the meantime a portrait of Benincasa has been discovered, and he looks nothing like the individual in Stradanus's portrait. The second identification (by Valentina Conticelli) is more probable, except Bonsisti was not a scholar, and the person depicted has all the trappings of the university scholar. He has the scholar's cap, the eyeglasses, and a robe with fur trimmings: the individual is clearly a university-trained physician.

But what is a scholar, usually portrayed in a study, doing in a practical laboratory? In my view this is a statement about alchemy and its dual character of being a natural philosophy and a practical art. In this reading, the physician's presence is symbolic of this union of theory and practice.