Start Here: Guide to the Exhibition

This exhibition presents a selection of twenty-three drawings, sketches and photographs by the archaeologist Sir Arthur J. Evans (1851–1941). Probably best known for excavating the ancient site of Knossos in Crete, Arthur Evans was encouraged in his education by his father and travelled widely as a young man. Among his earliest adventures, made while still an undergraduate at Oxford, was a trip to Finnish Lapland with two friends in the summer of 1873. Setting off from England in early August, the party sailed along the Swedish coast as far as Tornio on the border with Finland, there transferring to an overland route and working their way northwards, on foot and by canoe, to Lake Inari in the Arctic Circle. Hiring local guides to pole their vessels up the rapids, the three Englishmen experienced ‘a country of tame reindeer’, as Evans recorded it in his journal, and ‘a people who evidently love ornament and colour’. The photographs taken by Evans, and more particularly his lively drawings of the Finnish and Saami settlements where they stayed, exhibit the wide-eyed excitement of youth and provide a visual narrative of the journey. Evans returned home with memories and some objects, and an interest in northern peoples, but never put to paper anything more on the remarkable voyage.

Also highlighted are various drawings and ink sketches made by Arthur Evans while travelling with his brother through Bosnia and Herzegovina in 1875. These show places and people encountered on a route south from Agram (present-day Zagreb) – via Tešanj, Sarajevo and Mostar – to Ragusa (Dubrovnik), traversing a region which at the time was suffering considerable unrest. The illustrations demonstrate a particular interest in physiognomy and dress, Evans writing concurrently, for example, of Turks, of Southern Slavs and the ‘beauty of the Croatian peasant costume’. Undertaken primarily as an aide-mémoire, the drawings subsequently also provided the basis for engravings published in his account of the journey, Through Bosnia and the Herzegóvina on Foot during the Insurrection, August and September 1875 (1876), whose success brought about a second edition the following year.

Displayed alongside Evans’ own drawings and photographs is a selection of related material collected by him. This includes sixteen cartes de visite showing portraits of Saami people by studios in Norway and Sweden, including those of Marcus Selmer (Bergen), Rosalie Sjöman (Stockholm) and Jørgen Wickstrøm (Tromsø); four lithographs depicting scenes of everyday life in Swedish Lapland; and a Saami spoon made of carved reindeer antler. Also included are four cartes de visite by the Ignacy Krieger studio (Krakow); and four photographs of Russian ‘types’ by Wiliam Carrick (St. Petersburg). The majority of Sir Arthur Evans’ archive is held by the Ashmolean Museum of Art and Archaeology, where for many years he was Keeper. This collection, being principally ethnographic, was donated to the Pitt Rivers Museum by Joan Evans, biographer and half-sister of the archaeologist, in 1941.

Explore the Display Case
Not prescribed 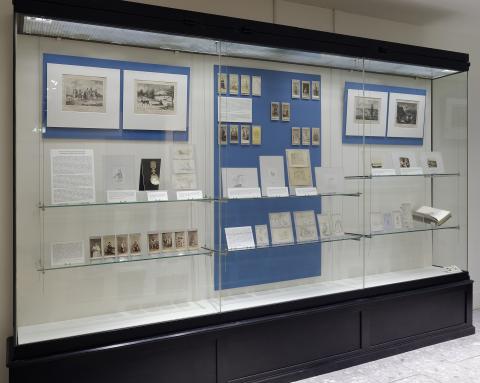